The recent Boda Discovery by Alkane Resources Ltd has highlighted the regions potential for further Tier 1 discoveries.  In particular, this discovery demonstrates the potential of the northern Molong Belt for major gold-copper porphyry discoveries where the company holds an advanced target portfolio and dominant tenure position.

Magmatic’s Wellington North Project covers a majority of the northern Molong Belt essentially surrounding  the Boda porphyry gold-copper discovery made by Alkane Resources in September 2019 (ASX ALK 9/9/2019: 502m at 0.48 g/t Au and 0.20% Cu from 211m down hole and open at the end of hole).

“Alkane has just made the best porphyry exploration discovery in the Lachlan Fold Belt outside the 3 major mines, in the last 20 or so years” (ASX AQX 19/9/2019) – John Holliday (led the Cadia-Ridgeway discovery team)

The Boda discovery has demonstrated the porphyry signature in the northern Molong Belt and has had an immediate impact on Magmatic’s exploration strategy at the Wellington North Project.  Several targets have been upgraded for Boda-style and Cadia East-style porphyry gold-copper mineralisation.

Reprocessing of previous close-spaced aeromagnetic data defined a circular feature (possibly intrusion-related) at Lady Ilse. Three-dimensional interpretation of the data has shown that the source of this feature is likely to be deeper than the previous RC drilling.

The shallowly drilled supergene gold anomaly at Lady Ilse indicates potential for a large open corridor of up to 10km in extent with significant untested porphyry gold-copper potential at depth. 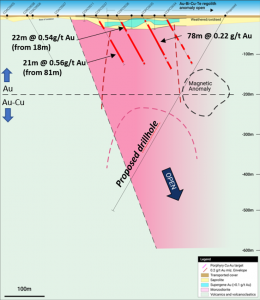 Additionally, recent data reinterpretation has identified several alkalic intrusives that appear to be an extension of the Boda trend.